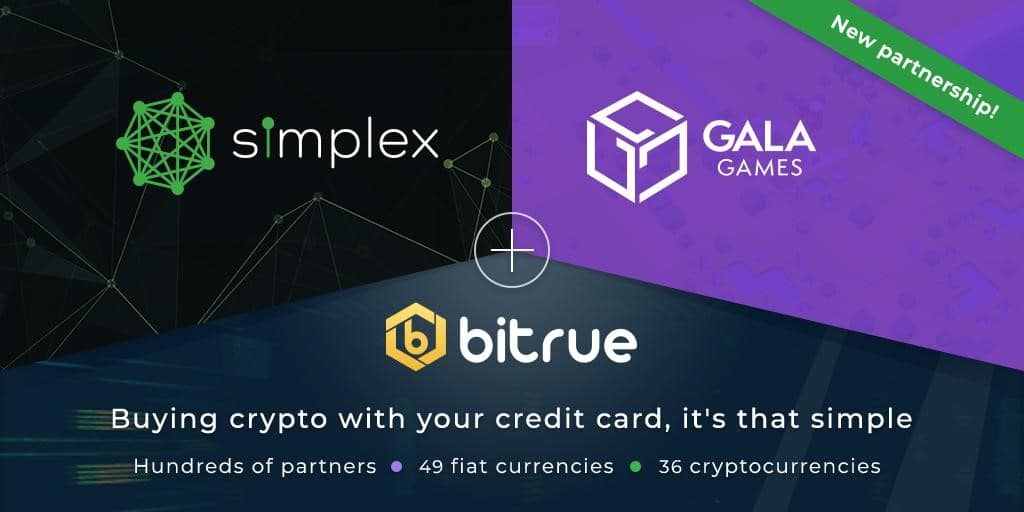 Simplex, the leading fiat infrastructure for crypto onramps, today announced support for the purchase of the GALA token. The new ERC-20 token can be traded inside the blockchain game Townstar, co-developed by one of the founders of Zynga, Eric Schiermeyer. Townstar’s launch is a revolutionary milestone in bringing together the power of blockchain technology and accessibility of casual games, which opens the ecosystem to over 2.4 billion gamers worldwide, through the Simplex fiat onramp infrastructure.

The purchase of GALA will be supported through Simplex’s partnership with the digital asset management platform, Bitrue. This partnership will give more people the opportunity to have a swift onramp to GALA, which was previously only utilized as a reward for the operation of the Gala Games Soft Node. In addition to the introduction of a fiat payment gateway, GALA token will be made available for trading via Bitrue, providing broad exposure to Gala Games from the existing crypto and blockchain communities.

As the pioneering provider of global, riskless fiat rails for the cryptocurrency market, Simplex is taking digital asset adoption to the next level by facilitating GALA’s link between blockchain and mainstream games. GALA’s integration with Simplex brings a fiat pipeline to the world of on-chain gaming, making it easier for players to engage and for blockchain newcomers to be onboarded. Collaboration with Gala Games marks the first time that Simplex, whose partners include major exchanges, wallets, and brokers, has integrated with a blockchain game.

“It is our hope that with Bitrue and Simplex, we will be able to make blockchain gaming more accessible to more people. One of the challenges confronting blockchain projects is the fact that the global blockchain community is small. By opening up onramps through more conventional means of financing, we make it possible for over 2.4 billion active gamers worldwide to participate in this growing ecosystem.”

“We’re excited to announce our partnership with GALA, who are leading the way in connecting crypto and casual games. Casual games are an innovative application that will open up the ecosystem to many new users. Simplex is thrilled to work alongside GALA and Bitrue to enable billions of people to easily and securely onramp to the community.”

Gala Network is a blockchain platform that hosts Townstar, “the Farmville of blockchain,” which enables real ownership of in-game assets using the ERC-1155 token standard to facilitate buying and selling of NFTs (non-fungible tokens). After connecting with an Ethereum wallet, Townstar players can harvest crops, build a house, and even construct an entire city. Within the game, players can store assets such as BTC and ETH in an integrated wallet and purchase items on the marketplace.

Simplex has been changing the status quo of crypto on/off ramps since 2014. Working alongside the biggest names in the crypto ecosystem, including Binance, Huobi, KuCoin, Bitpay, among hundreds of others, Simplex provides the complete fiat infrastructure for the cryptocurrency ecosystem. Simplex offers a range of risk-free solutions, including debit and credit card processing that ensures full charge-back prevention, the Simplex Account, an end-to-end fiat banking solution that supports local payments methods, and the Simplex Visa card, to use digital currencies in everyday life. As a licensed EU financial institution, Simplex was selected as one of the 10 most impactful companies in blockchain in 2020. Put simply, Simplex is making crypto accessible to humans, turning the complex into the Simplex. Keep up with the latest Simplex news by following us on Twitter.

Launched in July 2018, Bitrue is a diversified financial services platform with support for trading, loans, and investments. Bitrue aims to utilize blockchain technology to bring financial opportunities to everybody regardless of their location or financial position. The company has offices worldwide and continues to develop new features at a rapid speed to fully service the new wave of the digital economy.